It is around 85 thousands (at least) across the Eurozone, which is the area on we have realistic data, the number of dogs got lost, injured or dead by hunting exercises every season. It’s a huge number.

The impact of this abuse and neglect is even greater of what appears. Hunters seldom get in affection with their dogs; they literally use them as hunting tools and rarely spend time and energy to search and rescue them back from the hunt’s field. Follows that they will be searching and buying more puppies to train for the season to come. Many times happen that they need adult dogs to fill te losses to cover the last hunting month (January in Italy for example), and they get them from the illegal martket, that 90% of the times in rural areas means stealing dogs from Rescues ans Shelters.

More than half of the dogs we actually rescue and rehome every year come from hunters and their market. This is enough for us to state that we are AGAINST HUNTING AND BLOOD SPORTS, IN EVERY FORM. There’s no compassion on these dogs as they’re considered nothing. Media generally protect hunters and bloodsports for the abused and consumed theory of “traditions”. But the new generations are smart, the average age of hunters is about 65, there’s no enough generational change.

This is hunting, it looks like horror movies, but it’s reality. 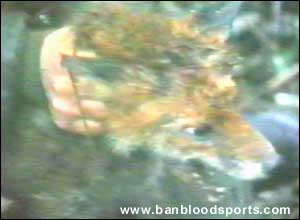 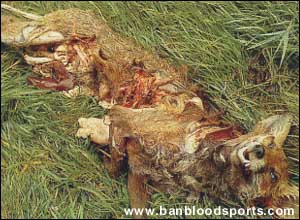 Hunters accuracy for their “war tools”: Why we’re against legal hunting by Wild Jepa

Hunting is nothing but poaching with a permit. It encourages trade in wildlife products which hastens the extinction of the species. Skin and fur trade resulted in the extinction of several tiger species and leopards too while ivory, gallbladder, horn and fin trades resulted in the deaths of thousands of innocent animals like elephants, bears, rhinos and sharks. All this for what? Well, to capture the bizarre demand for Chinese medicine which has no scientific value whatsoever.

Where is the scientific evidence that people who eat monkey brain, grow smarter and those who eat lion’s heart grow braver, and perform better if they eat tiger penis?  Why are we doing this to those who cannot defend themselves and who are simply going about their life? Think about it. Vested interests exist everywhere but ignorance is a major cause too and it is our responsibility to fix it before it is too late.

The two-legged creatures reduce hundreds of wildlife species to extinction every year for sport, trophy and profit. With the finest fauna gone rapidly, the earth is becoming a lot poorer and uglier.

In today’s world, the pros and cons of hunting should be apparently clear as hunting for sustenance has given way to hunting for sport. Even more so hunting plays a very destructive role in the environment. When hunters kill too many animals to satisfy a demand, it threatens the survival of the species. The cougar was also locally exterminated in most areas of the US to protect livestock. However, the elimination of such an apex predator led to explosions in the deer population.

The reward of hunting, if any, cannot match the price the wildlife pays.  Countless animals suffer prolonged painful deaths when they are injured but not killed right away. For instance, the wild animals are more often than not shot two or more times. It would take 15 minutes or more for the poor beasts to die so hunters can take pleasure watching the animals die slowly and painfully.

The US Hunters’ Alliance estimates that 50% of animals who are shot with crossbows are wounded but not killed right away. As they get wounded they go through starvation because their ability to hunt natural prey is incapacitated by the injury. Under such circumstances cougars turn man-eaters. Same is the case with incapacitated tigers and panthers that turn man-eaters and terrorize villages living in the jungles of India.

Hunting disrupts migration and hibernation patterns and destroy families. For animals like wolves who mate for life and live in close-knit family units, hunting can devastate their entire communities.

The stress that hunted animals suffer because of the fear and the inescapable loud noises and other commotion that hunters create, also severely compromises their normal eating habits making it hard for them to store the fat and energy that they need in order to survive the winter.

Unfortunately, the so-called Wildlife Conservation Programmers almost wiped out wolves, coyotes and bears in Alaska. To attract more hunters and revenue from the sale of hunting licenses, “conservation” programs make sure that they inflate the numbers of animals they call game for hunters to harass, maim, and kill.  Deer and bison also pay the price. What kind of insane world are we living in?

Hunting is not needed to control the numbers. The two billion-year-old system works fine on its own. If left alone, animal population would regulate their own numbers. Those who truly care about wildlife donate money to save habitats without expecting a dead body as a trophy in return.

Again, hunting is not needed to regulate animal population control. And there are still a good number for predators out there that man need not take the role of so-called guided predators to restore nature’s balance.

Corruption and insufficient sentencing deterrents also create regulation difficulties. Police and forest officials are often working in cahoots with the poachers. Without the political will, Thailand and southeast Asia risk a massive and irreversible loss of biodiversity as natural resources continue to be plundered overtime.

Although rare, inevitably they’re going to be hunting accidents. Most of these are caused when hunters mistake other hunters for prey.

Well, once you familiarize yourself with the pros and cons of hunting, it is up to you to decide where you stand. Hunting is a negative outdoor experience inflicting violence and causing suffering to millions of majestic animals. One need not hunt to gain knowledge about nature and wild life.

Just walking in the wild and using the power of observation can help you gain insight into the wonders of nature.  This way you can learn survival skills too, if you ever find yourself stranded in the wild.

Not long ago, humans had to hunt to survive but in today’s world of science and technology you don’t need to do that anymore unless you are starving in a war-torn country like Somalia.

Anti-hunters and anti-poachers contribute a lot simply by respecting the continued existence of animals that they love. So sound off! The greatest sound-off ever came from the Dalai Lama in 2006 during Kalachakra in Amravatti, India and the sale and use of animal skins and products in Tibet came to a complete halt overnight. That in turn put an end to the poaching and smuggling wildlife goods that go through Majnuka-tilla, Old Delhi to Tibet, China, Taiwan, Singapore, Malaysia and Thailand.

For some, hunting maybe family tradition that goes back for centuries where their ancestors had to hunt to survive but today hardly anyone needs to hunt to subsist. Also, hunting and killing can never restore your soul (no evidence that soul exist but well) and to be one with nature. Hunting is killing. Period.

At the end of every hunt, if you have some conscience left and if you are capable of empathy then you should be filled with shame and remorse for having slaughtered beautiful innocent living beings. No, you call it commune with nature? In this modern form of hunting, there’s every danger that many wildlife species will be go extinct in the next hundred years.

Too many people in this world spend too much time trying to cause others to suffer under various sick rationalization only to experience cheap thrills at others’ expense. Don’t people really have no idea how magnificent these animals are?

As a human being and as a man I am ashamed of the fact that, just one example, I saw eight hunters who by the way happen to be white, armed to the teeth and provoked and fired at just one charging lion and they lost. 8 against 1. What a shame!

Here let me go against my own principle for a minute that is if you crave dangerous thrill, go one on one on foot with a lion or a tiger in its habitat. The lion is armed with fangs, claws and instinct but no excuses to you. You are armed with a high powered modern rifle and the intellect. Any takers? I am sure many of you hunters will pee in pants. Be fair.

I really do not care what those whose feet seldom leave the cocoon of pretexts have to say about what it is like being stalked, chased and shot at. Imagine your parents or children being pulled upward with a fish hook in the mouth and you protest and some vested interest shows up and then tells you not to worry about it and that after all they are going upward, pointing to the heaven. Imagine what would go through your heart?

When I’ve had a chance to verbally cross swords with hunters I have learned that a few, if any of them, have a clue what it is to commune with nature.